Today’s Daily Heroine is: Princess Leia Organa (played by the late Carrie Fisher) from the original Star Wars trilogy, which came out in the 70s and 80s (and also the more recent sequel trilogy). The Empire Strikes Back is my favourite movie of all time, so I guess it’s no surprise that Princess Leia has always been a big favourite of mine. She is feisty and fearless and very attractive, especially in Return of the Jedi. That sexy slave costume of hers is something that is etched into my memory for all eternity.😆 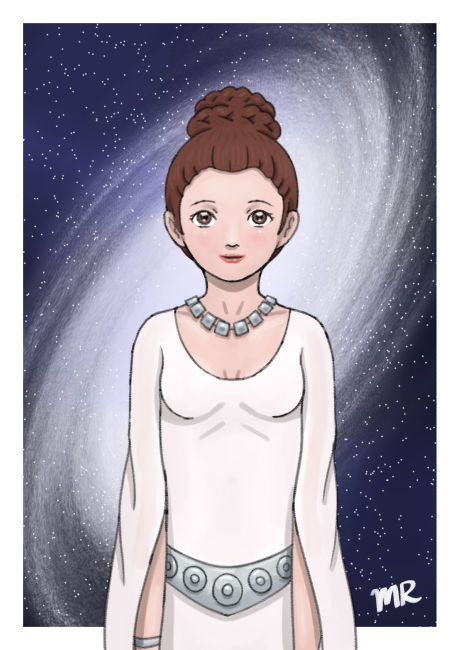 I’m sure everyone is aware that last week, at the end of 2016, Carrie Fisher passed away. Carrie Fisher was without a doubt a huge part of Star Wars and Star Wars has always been a big part of my life, so I really wanted to produce something to honour Ms Fisher and her iconic portrayal of Leia Organa, the princess from that amazing galaxy far, far away.

Carrie Fisher, as Princess Leia, had several outfits in the Star Wars films, the most famous of which was the gold metal bikini she wore in Return of the Jedi. I was young when RotJ came out and boy, that bikini was a real eye-opener!😀 But for this picture, I chose to depict her in the costume she wore at the end of A New Hope, in the medal presentation scene. I’m sure that most people would agree Ms Fisher not only looked fittingly regal and resplendent in that scene; she looked almost angelic.🙂

Farewell, Ms Fisher. You have left this world, but the light of your memory will continue to shine brightly for a long. long time.