For a quite a long time now, I’ve been thinking about making my own customised Lego minifigures, especially ones of characters that are unlikely to ever become official minifigures. Well, I’ve finally gotten around to making my very first one: Tanya Serebryakova (Татьяна Серебрякова). 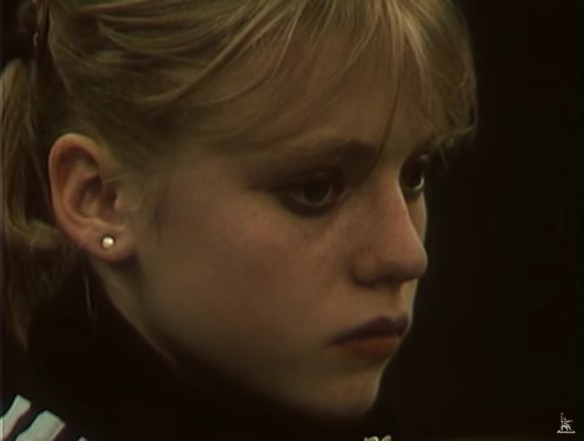 “Tanya who?”, you may ask. Tanya Serebryakova, my favourite (anti-)heroine of the moment. You can find out more about her, and the media she appears in, in the post I wrote about her, which you can check out HERE. But putting it briefly, Tanya is the protagonist of an 80s Soviet film called Dolly or Kukolka (Куколка). She is a young, world-class gymnast and she is played by the lovely Svetlana Zasypkina (Засыпкина, Светлана). 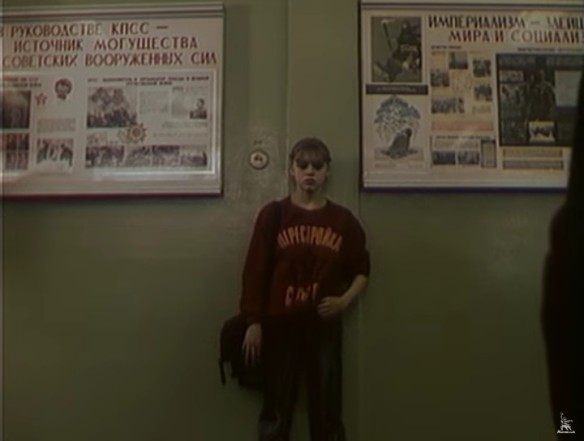 This is the outfit Tanya wears on her first day back at a normal school (despite the fact she should be wearing a school uniform like everybody else). I think the bright red top is very cool. The text, in Russian, reads “ПЕРЕСТРОЙКА СССР”, which can simply be translated into English as “Perestroika USSR”. (Perestroika, which literally means restructuring in English, was a bit of a buzz word back in the late 80s, even outside of Russia, and referred to government restructuring in the Soviet Union.) Tanya is also wearing stonewashed jeans, probably in an effort to show-off her worldliness to her classmates. I can’t imagine the average Soviet citizen could afford the latest western fashions at that time. They are not in this shot, but the same probably goes for her sneakers (which are white), although I couldn’t discern any brand on them.

OK, so here is the minifigure I made. It’s a standard minifigure, made up of standard Lego parts sourced from eBay and BrickLink. For her dark blonde hair, I chose this particular brick yellow ponytail. There are a few Lego ponytails available, but this one is the best in my opinion, despite the fact that it’s parted at the front. For her arms, I chose light nougat/red dual-moulded arms, since Tanya wears her sleeves rolled up. And for her stonewashed jeans, I chose medium blue legs. All of the minifigure’s finer details on the head and torso, are stickers. I drew them using both Clip Studio Paint and Affinity Designer, then I printed them onto white inkjet sticker paper using an Epson printer. Finally, I cut them out with a Silhouette plotter. As you can see, I also added plain-coloured stickers on the legs: a red one below the top at the front, to make the top look big and baggy, plus a couple of white ones on the feet, to represent sneakers. This minifigure has no stickers on the back.

I used white sticker paper because inkjet printers do not, of course, print in white. If they did, I could print on transparent sticker paper, or even decal paper, which would look a lot better. But by using a quality printer and quality paper, along with colours taken directly from the Lego colour palette available on Brickset (which is a fan-run Lego resource website), the stickers match the Lego pieces almost perfectly. Well, at least to my eyes they do.

So there you have it. My first customised Lego minifigure! Overall, I’m pretty happy with it. The only thing I find slightly disappointing is the sticker paper. The paper I used this time is great in terms of colour, but it’s a bit too thick. If you look at the minifigure carefully, the edges of the stickers stand out a lot. Moving forward, I would dearly like to find sticker paper of comparable quality that is a bit thinner. And speaking of moving forward, I’ve already assembled the parts for what I’ve decided will be my second customised Lego minifigure…

I wonder if anyone can tell which character this minifigure will become? Hint: they are a character I’ve talked about on this blog before. Anyway, that’s all for this post. Till next time, au revoir, arrivederci and may the force be with you!😊