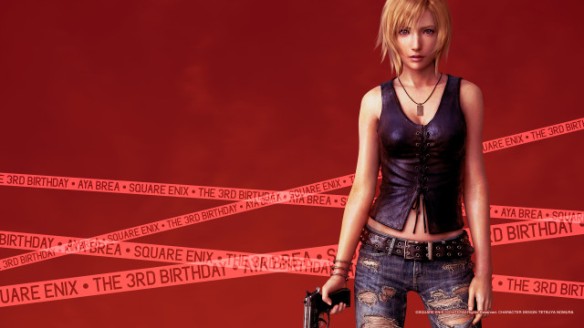 Today, I noticed that rumours are swirling about in regards to a possible new Parasite Eve video game. This is due to the fact that Square Enix, the company behind the Parasite Eve video game series, has supposedly made an application to trademark the name Parasite Eve in Europe. So given that, I think this is an opportune time to write a post about Aya Brea, the heroine of the series and one of my favourite video game characters of all time.
Parasite Eve began as a horror novel, written by Japanese author Hideaki Sena and published in 1995. Apart from the video games, this novel has also spawned a film and several comics. However, on the world stage at least, I think it’s fair to say that it is the video games that are known best, of which there have been three to this point: The original Parasite Eve (1998); Parasite Eve 2 (1999) and The Third Birthday (2010). I myself have only completed the first game (once), but I have seen the very interesting shower scenes from the latter games on YouTube.😀 They are both incredibly well animated and incredibly sexy. If you want to see them for yourself, have a look for them on YouTube. They aren’t difficult to find. 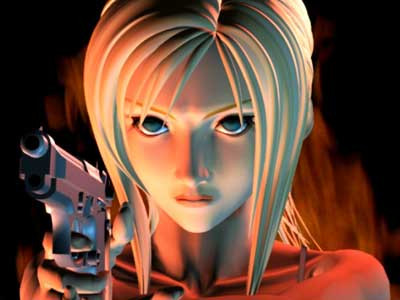 The original game is a classic horror survival action game, complete with fixed camera angle POV. It is set in New York City in late 1997 and involves the player controlling Aya, a 25-year-old detective in the New York City Police Department, as she battles Melissa Pearce, an opera singer who’s body has been taken over by parasitic microorganisms called mitochondria. These microorganisms have the power to cause others to self-combust, amongst other things. Aya, who is for some reason immune to the effects of the mitochondria, is the only one who can stop Melissa’s evil plans…

I remember Parasite Eve being challenging and slightly spooky, but all in all it was quite engrossing. The fact that it is based on a book gives it’s plot a great amount of richness and therefore the tone is quite serious. Aya, who’s in-universe birthdate is November 20, 1972,  is a great character. She is definitely the strong, action-girl type. She is Eurasian; she has blonde hair and blue eyes, along with Asian features. And she is very sexy! In fact, she probably gets my award for sexiest video game character ever. If you need proof, I once again refer you to her shower scenes.😋

As far as merchandise goes, from what I can tell there have hardly been any official Parasite Eve goods released over the years. And what has been released has not been that great, in my opinion. For example, Japanese toy company Takara (now Takara Tomy) released a set of Aya and Melissa dolls some time ago, but they basically look like run-of-the mill fashion dolls wearing Parasite Eve costumes. Perhaps now that a new game may be in the works, a decent figure of Aya will eventuate? I certainly hope so, as she is such a favourite of mine.

Well then, that brings us to the end of this slightly long Featured Heroine post. I’ll wrap it up with a slightly risqué illustration I did of Aya a few years ago. This is the only illustration I’ve ever done of her and I don’t think I’ve posted it here on Moe Dimension before. Till next time, au revoir, arrivederci and may the force be with you!😊