On January 10 of this year, the well-known Japanese RPG Maker-based indie game called Yume Nikki (literally Dream Diary) became available on Steam. At the same time, a related announcement was also teased. Then, a couple of weeks ago, a trailer was unveiled for a new take on this game, to be called Yume Nikki -Dream Diary-. This new game, which unlike the original will use 3D, is not being made by Kikiyama (the creator of the original game) but by Kadokawa Corporation, although Kikiyama has given the project his blessing. 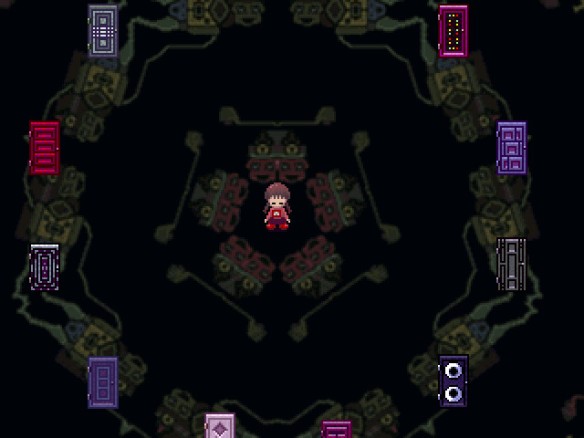 The original Yume Nikki was first released in 2004. I myself have been aware of it, or should I say, of Yume Nikki’s protagonist (nicknamed “Madotsuki” by fans), for quite a while through fan art on pixiv, but I’d never actually played Yume Nikki until it was released on Steam. It’s an unusual game, if you can even call it that; it has no narrative and therefore no obvious end goal. Rather, It is simply a type of surrealist experience. But I guess that ties in with the basic premise of the game; you play as a shut-in who, in her dreams, is able to explore several bizarre worlds that are populated with strange beings.

It appears that Yume Nikki has a large number of fans, but I couldn’t really get into it. I much prefer games with a well-defined story, such as Ib, which is another Japanese RPG Maker-based indie game. However, Yume Nikki -Dream Diary-, does interesting me, as It is not merely a remake of the original; it is a reinvention. The places Madotsuki visits in her dreams appear to be slightly more grounded in reality (although still weird and unsettling) and the gameplay appears to be much more linear. For me, both these things are positive improvements.

Yume Nikki -Dream Diary- will be out on Steam on February 23 and will be priced at US$19.99. Till next time, au revoir, arrivederci and may the force be with you!😊