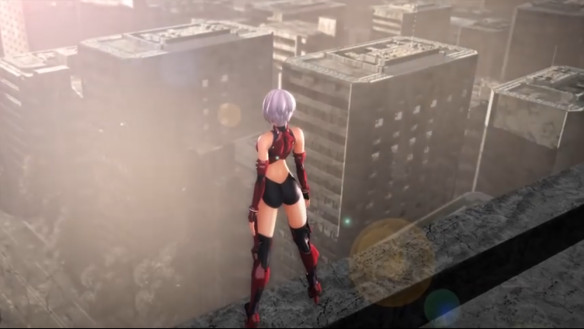 A few days ago, I found out about Promised Town, a 3D animated short made by a Japanese artist IKEDA. The full title in Japanese is something like Imaginary 3D Battle Action Animation “Promised Town” (Japanese Ver.). If you like 3D anime, it’s definitely worth checking out.

This short appears to have been originally created as part of a music videos for the idol group Carat Type R’s debut song RED LAMENTATION, which was released a few days ago, but this a separate, standalone version. As you can probably tell by the title, it features a lot of action, which is a bit over the top and a bit cliched, but nevertheless I enjoyed it. In particular, I found the the pretty but wistful female protagonist, LUKA, very appealing. And as a bonus, she features in some nice fan service too. [^_^]

The music video I mentioned above is also available on YouTube. It is also worth having a look at, because it provides a prologue and an epilogue to the story, which are both absent from the standalone short.

Promised Town is in Japanese, but on July 1 it will be released in multiple countries in multiple languages (I assume this just means on YouTube).

That’s about it for this post. Till next time, au revoir, arrivederci and may the force be with you!